for +6,000 years we have been in what I call the *DarkAges* and we were enslaved by “Gods” and held against our own will in a “Matrix” where the veil, the filter was very hard to impale. Those who did became “prophets” of Christ consciousness. Some ascended and became Masters – and now part of the Shift connecting with us from the other side of the veil. So if and when you impale the veil, the grid works of the “old Gods” you can connect with these – the good ones. However, depending on Who You Are you can as well connect with the source of *Creators* of the contrast to unconditional love. It might be.. *rightousness* to control others and I give you one source that gives the “right” to kill in belief; Allah Akhbar. There are many very *dark* Sources that we may call *evil*. They are a source. They exist. And they do not exist. Depending on you and your consciousness. Everything already exist. There is nothing that you can Create that has no source. In order to exist there is a source to it. Obviously.

As everything already exist we can choose to bring into our experience – our reality – anything that exists. If you have ever been pondering why there can be a peer of people that have in their reality something “new” to you. In a way you do know that may exist but where you come from – you never faced it. The interesting thing is that if and when you become entangled with this peer or people of it you also connect – perhaps too easily – to the grid they have decided to connect with. Thus, there will be a cable – a string – connecting you to this source. When you go back in history you might be awed by things that have happened. You might be awed by things that happens to you now or that you.. see on TV.. well, don’t watch main stream TV though I don’t like to be “conspiracy theorist” it’s as is programming your mind on faulse premisses. It’s a mind control thus it is called “TV programs” ; ) I will – or will not – write more about TV but shortly the less you feel for watching it the closer to ascension you move.

What I would like to write about this time is Ascension. You’ve heard about the “Shift” and “awakening” and for many it’s mumbo jumbo. But take a look at this picture. As is you are recycled and the “Gods” I mentioned have been feeding on you and that’s why they call you “the harvest”. I am not going into the history about our fascination about Gold but these “Gods” have been very – dependent on it. Thus we became the slaves to dig it out for them. That’s another story because it’s mere academic. What you do want to know is that if you read this you’re still in the grind – and you will be recycled. If you don’t read it – well – no point writing anything to you! But I will write to those who read this; those who don’t are already on the other side with both feet. Some of us are living with one foot in the Matrix and have succeeded in pushing through the grids of the Matrix. But.. you and me we are not on the positive side of the Shift as I am writing and you’re reading.. the difference might be that you are after you die still a *negative* energy producing light bulp in the Matrix and reborn as such. I am not. I do not fancy my Life here though I took upon me to come here at this time and space reality. The physical me you may talk to and look at is a little different from the one you experience if you are gifted to see me – in non physical. But that’s also another story.

So, the real reason why I am writing this and exposing the *filthy* way F.U.B.A.R. reality we sit in right now is so that we can disconnect from the Matrix, impale the veil and connect with the other side. That’s not our main focus but the imperative *issue* we have is to set you free. Freedom. Move into a free dome. Domestic. Home. Haven on Earth. Safety. Kindship. Unity. Love.

Some people that read this will.. choose to be part of Darwin’s evolution theory or follow some scriptures. But one element defining someone who is far far far from Ascension and aWakening and thus will not be able to make the Shift is someone *judging* me, what I wrote or possible you for talking about this with them.

If you allow the cycle in this picture to be Your cycle of Life – that’s fine. It really is because in this cycle there are a lot of new experiences for you to face. You can “face” whatever reality you choose – eventually. But if you are sick & tired of it. Then it’s the right time to learn about our true potential and reWrite history for YourSelf. 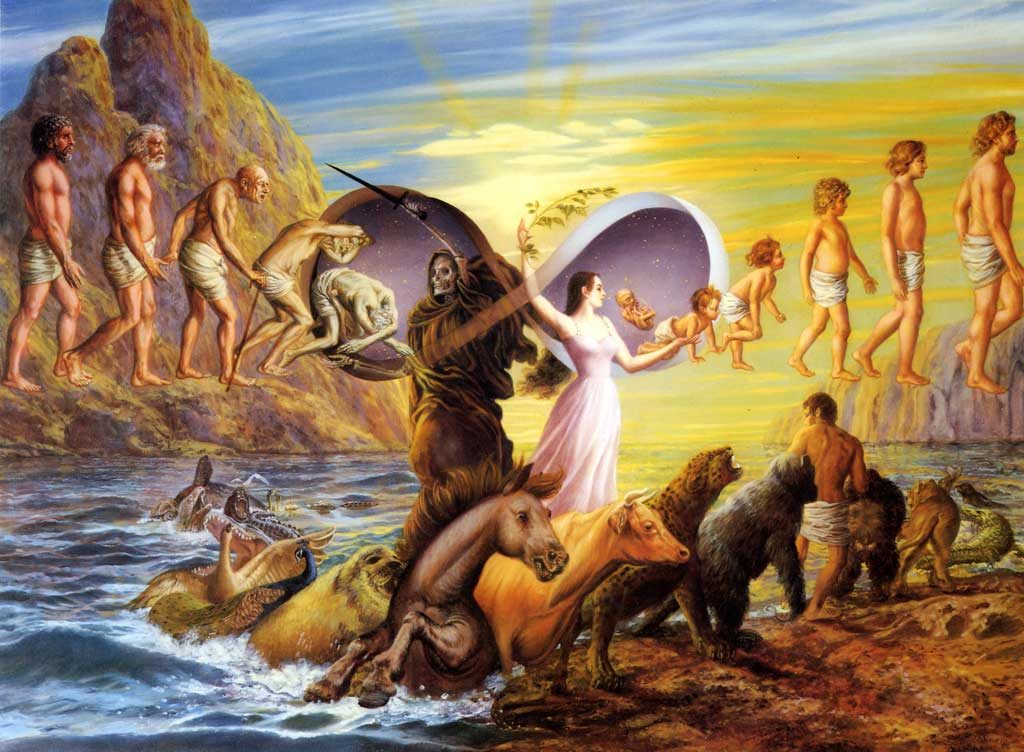 when you tap into the coCreation with the Source of Love, God if you so will – it doesn’t matter what religion you used to hold. Allah Akhbar was just an example because.. you’ve seen the news and what people are capable of. But the “Christians” have the same story to tell. They weren’t coCreating with Love at heart. Find the voice of your heart, that Truth and you will find the One Omni God that will help you aWaken.