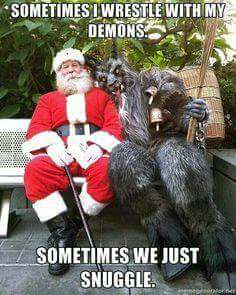 we are now moving out of *selfishness*
as in me with my protégés vs. the prey

to °unity consciousness° and coCreation

no one on the good side of the veil will judge you or anyone. But..

your *DarkSide* and what you in your reality and your essence is connected with will be revealed. You will face all active aspects of YourSelf.

This is theShift. This is the Awakening. This is the times of disclosure and reEvolution. We are moving into Our True Potential. But first..

even Santa, the aspect of Christ, satan and illumination will face their own demons.

Some people have had their last face time with density and the fallen Self and a Light beings – not as in visual range of our senses but as in heavy and light are lifting up their own beingness but also uplifters of frequency & vibrations.

‘All aspects’ of beingness is unique while part of similar fractals in the range of sameness & kindhood.

You’re unique no matter you buy a santa dress on bulk and pretend to be a look-a-like. And though you may Judge and take part in harm-a-geddon. Honesty.. your unique face time of your innerSelf; Who You Really Are will change You. And ..to take on such a Gift to indulge in SelfAwareness and activating your Own consciousness you will exit the mind control, enslavement and eventually the Matrix so.. that you don’t have to be recycled and harvested till the end of your body where you reEmerge in a new physical form to re-in-act another Life Time of suffering which is one of the main aspects of low and heavy density space time reality; suffering sorrow lack of need and desire trying to..

Though.. many may do so based on free will and unique Evolvelement & involvement – another run of ground hog day Life Style. 50 shades of grey on repeat.

fool you not; Golden Age might sound like something to lure people into a trap. The “Gold” is of a peculiar role in the game of Master and Puppets. A curse. A spell.

while a time and space less language melody song and sound frequencies is coming out loud when we learn to listen and use our voice again. That brings Our Evolution beyond the wildest dreams of quantum theorists. It’s not only beautiful in it’s spectre but it will change our percieved reality into multidimensionality. Our IQ and EQ will bust the charts of Academia. And negative syntethisim becomes obsolete. We move into harmonics coherence convergence and flow and syncronicy.

As I posted this to Facebook this appeared and I posted it consequently:

in complete syncronicy
this appeared as I posted my other post

One thought on “Santa’s demons are out..”