BitCoin is about decentralizing money back to the people as in by the people for the people where everyone’s wallet is their own bank. #blockchain angel investments, sharing, loaning, and crowd funding become mainstream and thus it’s the demise of the parasitic elite’s centralized bank. 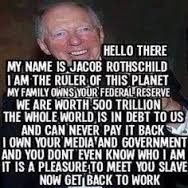 The origins of FIAT money run by the FED and IMF (U.S. dollars and euro) is in Sumeria and Babylon and is of religious proportions. It’s a mechanism of “harvesting” based on printing money out of thin air and distribute it as debt in order to gain it back with an interest. Those who fail to produce the interest and pay back the debt need to pay in commodities and assets. Those who seek world domination “harvest” the world this way; little by little they acquire wealth in this fashion.

Those who are behind the behind the scenes government is a mix of the Roman Empire (Vatican) ruling the Royal Society and MonARCies of the world and the zionists (Khazarians).